Fish are not much selective when it comes to eating behavior. But some foods are strictly recommended not to provide to your fish. Many fishkeepers asked about can fish eat bread?

The direct answer to this question is that most fish can not digest the bread without being affected. Only some species can eat bread, but it is not recommended to feed fish bread. So let’s know why bread is not recommended.

Is Bread Okay To Feed Fish?

There is the presence of yeast in bread when fish eat the bread, which causes constipation in most of the fish. Few specific types of fish that will not be affected by eating the bread and bread are safe for them. Many species of fish will suffer from this.

But some fishes can eat bread without getting affected by consuming pieces of bread. Koi fish can eat bread and this fish is one of the few fish that you can feed bread in a proper way.

There is a specific type of fish, i.e., the most resilient fish has an amazing color. The species of these fish are excellent. The people who are feeding their fish with pieces of bread think that they are doing an amazing job.

But they are not able to see the damage caused by pieces of bread. There is another option of food which you can feed to your fish. This food is called pallets, and it is a better option instead of giving them pieces of bread.

Can I Feed Fish Bread?

Fish can eat the bread if you feed them. But this is also a fact that pieces of bread are not healthy for fish. The bread has gluten and yeast that the fish will not digest. By taking bread, fish can be subjected to many health problems.

These health problems can be swelling, bloating, and constipation. Bloating can cause laziness in the fish. In that case, fish will not swim actively, and they will not want to eat anything. The metabolism of fish will also get affected.

Feeding fish bread is a very common mistake that people made, and it is really bad for the health of fish. You can give them bread as a treat but should not feed them regularly.

This mistake can lead them to many health problems. The pieces of bread also contain carbs which can make them very ill. What do small fish eat?

What Happens When Fish Eat Bread?

Many health problems are caused by eating bread in the fish. The first thing that will happen to your fish is constipation. There is a large amount of gluten in the bread, which is not digestible by the fish.

Even humans cannot digest gluten properly. When fish eat gluten, then it will make blockages in the large intestine. When blockages are made, the fish will become unhealthy and ill.

Swelling of the stomach and bloating in the fish is also caused by eating bread. Yeast caused the swelling in the stomach of fish.

The fish will become lazy by eating the bread as bloating causes laziness. By eating bread, the metabolism of fish will also be lower. The fish become constipated, and they don’t want to move.

What Kind Of Fish Eat Bread?

So, if you are not able to find some alternative of the bread from the meal of fish, there are some types of fish, such as suckers, carp, and catfish. Bread is an excellent bait for these fish.

Most of the anglers use dough balls. These dough balls are pieces of bread that are present onto a ball with a hook. The anglers do fishing with them at the bottom.

Bread is something you should not feed the fish by yourself because fish will eat whatever you will feed them. Pieces of bread have carbs, gluten, and yeast, which are not good for fish health and cause serious health problems.

Can Fish Die From Eating Bread?

Yes, bread can cause the death of fish as pieces of bread are harmful to the health of fish. Feeding bread to the fish can cause serious health problems such as swelling, bloating, constipation, and even death.

This is because bread contains yeast, gluten, and carbs. These substances are not digestible for the fish and cause blockages in the large intestine. The waste products did not pass out from the body of fish and cause poisoning.

The metabolism gets lowered, and fish become lazy and cannot move. Most body parts of the fish cannot swim, and this causes the death of fish. When the fish become ill and unhealthy, then only the most resilient fish survive. The predators will take the other fish.

As most fish cannot digest the bread, so fish cannot eat the bread. The digestive system of many fish is not tough as dogs and humans. This is a mistake that most humans do and this can cause serious health problems. So, the question about can fish eat bread? is now answered.

So you should avoid feeding bread to fish if you have a better option. However, some fish can eat bread, but it is not recommended to provide them. 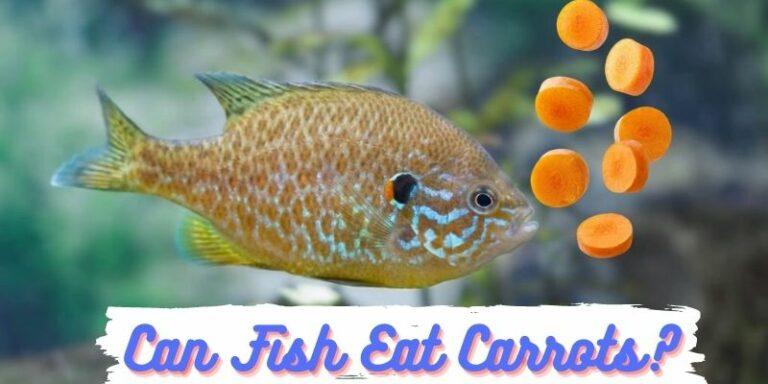 Fish are fond of eating various foods, and pet owners also want to share their foods with their tank friends. The query regarding whether can fish eat carrots is being asked by many individuals. The straightforward answer is yes. Fish can eat carrots whenever you serve them, and they will get benefit from the nutrition… Cheese is one of the popular foods produced from milk and is widely consumed in the world including among many pets. That’s why many people around the world have asked, can fish eat cheese? No, fish can not eat cheese due to the presence of dairy product components in the cheese. Especially for long-term feeding… Baby koi fish are not able to consume foods that Koi fish eat, due to their ability to intake the foods and their digestive system. Hence, it is important to know what do baby koi fish eat. Baby koi fish eat algae, brine shrimps, wheat germs, powdered fish flakes, and pellets. These foods are beneficial…

Piranhas are one of the most aggressive fishes in the world when it comes to behavior. Their eating behavior and what do piranhas eat are the most searched questions about them on the internet. Piranhas Eating Behavior Piranhas are omnivorous animals. Therefore, a typical piranha diet should contain insects, smaller fish, crustaceans, worms, snails, aquatic…

Parrotfish are not like other fish when it comes to eating behavior. Their diet is different than most of the fish which we can keep as pets. This eating habit of parrotfish raises the question in the mind of aquarists what do parrotfish eat? Parrotfish are mostly known to eat algae in the ocean, and… Koi fish eat foods that are nutritional for their health, and their diet consists of different kinds of foods, such as shrimp, fish foods, algae, plant matter, bugs, etc. But they also eat fruits, and hence it is important to know what fruits can koi fish eat. Koi fish can eat apples, oranges, bananas, watermelon, cantaloupe,…