Marble angelfish is a freshwater angelfish, and it is thought to be one of the bred varieties of the Pterophyllum scalare. It is commonly called silver angelfish by the aquarists.

All of the freshwater angelfish species fall in the same genus, ‘the pterophyllum’. They are geographically distributed over a wide range of rivers in South America, including the Amazon river basin and its branches.

Silver angelfish (Pterophyllum scalare) is the main angelfish when all of its varieties are compared. They have the same body composition features but vary in coloration and markings. Silver angelfish have silver bodies with black stripes that run vertically.

Gold varieties of marble angelfish have black-white but mostly gold colors, while black marble has more blackish colors and markings. But blue marble has more of a blue tint.

There are many variations in Pterophyllum scalare. This is the result of their breeding and interbreeding with other species of the Pterophyllum genus.

One of the results of this inbreeding is marble angelfish. But there is further variation in the marble angelfish based on the pattern of their colorations and markings.

They all have compact bodies that are pressed laterally, giving them an overall diamond-like shape. There are three species of marbles, which are mentioned below.

Identifying and distinguishing between the male and female marble angelfish is not something that can easily be done.

It takes a lot of experience and an expert eye to point out the differences which are not noticeable for beginners or ordinary people. Once they get matured, only then one can identify their sexuality, but that wouldn’t be easy either.

If the tank conditions are right, then it takes 5 to 7 months for them to get matured. Here are some physically apparent hints which can be used to determine their sexes.

The Lifespan of Marble Angelfish

The average lifespan of Marble angelfish is 10 years. However, they can live up to a maximum life of 15 or so years if properly cared for.

The Scalare fish and its varieties are very hardy. They show better resistance towards the fluctuations of conditions than their closely related Altum angelfishes.

It is also because the freshwater angelfishes that we generally find in aquariums are captive inbred, and they can easily get acclimated to the tank.

Despite being hardy, they still have some requirements to do well in the tank. It would be best to ignore the caring measures by getting satisfied with their resistive capabilities.

The nitrates level can prove to be fatal if they exceed the limits. By monitoring the water conditions, making water changes regularly, and making sure that the tank is not overcrowded, you can ensure your acquisition’s maximum lifespan.

Marble angelfish belongs to one of the varieties of Scalare fish, which are the fish that are equally popular and safe in the hands of both experts and beginners.

Caring for the Scalare varieties is very much easy as compared to the Altum angelfish. But that does not mean they don’t require any specific caring measure. Well, they are living beings, and they do require caring.

The marble angelfish are omnivorous feeders. They feed on the small crustaceans, larvae, insects, and other small fishes of their compatible eating size in the wild.

They occasionally eat the grassy weed as well, which fulfills their nutritional requirements for the natural fibers.

In the aquarium, their diet should mostly and mainly consist of proteinaceous food. They readily accept any life as well as frozen foods.

Shrimps, including Mysis shrimp, vitamin-enriched brine, and bloodworms, account for a treat for them. To maintain a balanced nutritious diet, the prepared food for carnivores, pellets, and high-quality flake foods must be included in their everyday diet.

Mosquito larvae are the delicious favorites of marble angelfish, and they tend to overfeed on them. Therefore you must offer them sparingly.

Breeding of the South American freshwater angelfish is on a commercial level. Most of the cichlid angelfishes that we see in the aquarium today are captive inbred and scarcely wild-caught.

The marble angelfish is also an inbred variety of the Pterophyllum scalare. Therefore, all the functional features of marble angelfish are the same as the silver angelfish, and breeding instincts are of no exception as well.

South American freshwater angelfishes naturally make nuclear families upon pairing up. A nuclear family in terms of breeding is a family of a male and a female with many or no children.

They reach the age of maturity somewhere between 6 to 12 months of age, and it depends upon the conditions of the tank. As mentioned previously, they can reach maturity from 5-7 years of age if the conditions are correct.

These fish prefer clean and clear water to spawn. Even if they pair up and the water is not clean, they won’t spawn. Moreover, a balanced diet with high protein content would also be favorable.

Water conditions play a very crucial role to trigger their spawning. The spawning water should be warmer and more acidic than normal water. Here are the spawning conditions mentioned below.

After all the breeding conditions are appropriately met, then the spawning will start. The female fish would lay hundreds of eggs, usually ranging from 100 to 1000 on some flat surface like submerged broadleaf or branches.

The male would then follow the female and fertilize the eggs. Now here is another problem. Over the years, a continuous commercial inbreeding of these fish has almost destroyed their instinctive property to guard the eggs.

They can eat their eggs. To prevent this, you need to provide a spawning surface like a shallow cup or plate-like thing, which can later be removed and hatched separately.

These angelfishes have their requirements for the size of the tank in which they will be housed. They need an aquarium that offers plenty of swimming and hiding spaces and has significantly considerable depth.

The minimum tank size recommended for the single specimen of marble angelfish is 30 gallons. For a pair, a 55-gallon tank can offer a satisfying amount of space.

The main and basic point to be noted in setting up their tank is to provide them with the best possible environment, which makes them feel at home. As we already noted previously that depth should be preferred over length.

A perfect angelfish aquarium would have length, width, and depth, all in an optimal proportion. Let’s keep things simple.

The tank should be provided with the plants with submerged leaves or expanded dense branches around inside peripheries. The rocky formations that make up crevices must be included and firmly glued on with the substrate.

Branches of the plants and crevices serve as hiding and resting places. The Center of the tank should be an open area for swimming.

You should install An efficient filtration system for carrying out all types of necessary filtration. Filtration of the water is necessary for preventing the accumulation of nitrates and other toxins.

As far as the tank’s bottom is concerned, provide the substratum, which can anchor the plant roots and hook the rockwork firmly. A mixed substrate of sand gravels is suitable.

The marble angels like dim lights. You can install a lighting system on the roof of the aquarium.

The cichlid angelfishes come from the streams of slow-moving waters and flood plains, which are densely grown with underwater vegetation. Thus, home to many angelfish as well as other species of fish.

Although they share a diverse habitat with a diverse group of species, confining them in a limited tank’s limited space is a different story.

Selecting tank mates for them is not an easy thing. You need to understand the possible behavioral fluctuations that they can demonstrate towards other species.

As we noted previously, these fishes form strong nuclear families. The males cannot bear another male’s presence within their territory, and they will fight until death.

Therefore you must keep singly or in pairs. Here is the general rule of thumb for selecting the tank mates for marble angelfish

Although these fish can be regarded as community fish and their behavior is dependent on what tankmates they are put together with.

They are peaceful when they are still underage, but instinctively they tend to pair up upon getting matured and develop territorial aggression. So, they are aggressive to the same species members, which they think threatens their territory.

Moreover, they also show aggression to the other peaceful species, and if they are of their compatible eating size, they hunt them down. So, avoid keeping the small precious peaceful acquisitions in the same tank with the marble angelfish.

Where can I buy marble angelfish?

The captive breeding of freshwater angelfish species is a hot business, and mostly the angelfishes available in the market today. Marble angelfish is a fixed form of silver angelfish that is readily available in fish stores and can be bought online.

The captive inbreeding of pterophyllum Scalare, a very common angelfish, results in a further diversity of freshwater angelfish in the aquarium trade. Electric blue ram is one of the beautiful fishes which you can keep in your aquarium. They are also known as dwarf ram cichlids because of their body size. Electric Blue Ram Size They are nothing but just the color morphs of their wild-type cousin. The ram cichlid can grow up to a maximum of… When you take an interest in a Parrot’s beautiful colors, you will also be intrigued by what is known as Rainbow Parrotfish. However, their size, nature, and design can be different than parrots. The Rainbow Parrotfish have a very distinct and unique appearance. So, they are not confused with other species. They have a different beak… Blue Chromis fish belongs to a diverse group of damselfish centered mainly in Bermuda, the coast of Southern Florida, and the Caribbean Sea, where it inhabits the coral reefs and lagoons in shallow waters. They make up one of the most fishes to be caught massively for the aquarium trade. Blue Chromis Size All the… 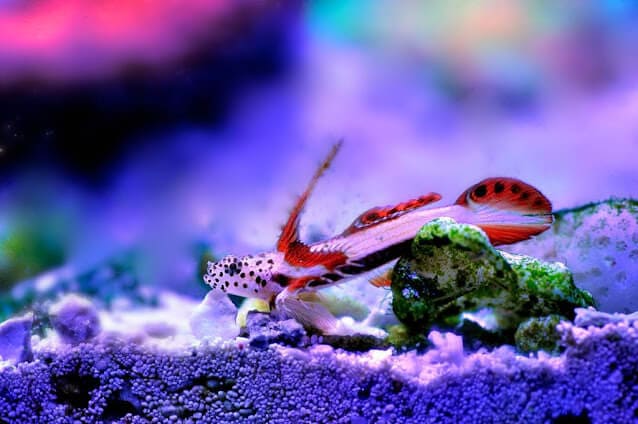 Flaming prawn goby fish is one of the two recognized species belonging to the genus Discordipinna. The species name is griessingeri. This makes up its scientific name Discordipinna griessingeri which is the concern of taxonomists and not the common non-scientific people. Size of Flaming Prawn Goby Do not get deceived by this long name, “The…